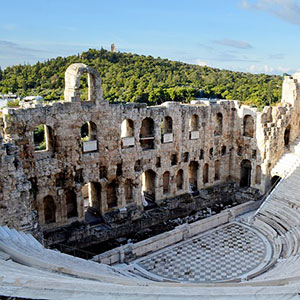 Your 7-night cruise on the Aegean Sea begins and ends in Athens. Start with an overnight and guided sightseeing to explore the Acropolis, ruins of the ancient Greek capital. Take some free time to enjoy the city before meeting your ship in nearby Piraeus. Sail to Kusadasi, Turkey-a favorite destination in the Mediterranean with its seaside promenade and the fascinating Greek, Roman, and Byzantine excavations of Ephesus. Sail to Rhodes, the site of the mythical Colossus of Rhodes-the 105-foot statue destroyed by earthquake in 224 BC. Visit Lindos to visit the Acropolis and the Citadel of the Knights. You’ll then cruise to the island of Crete and dock in Heraklion, and visit the ancient sites in Knossos-the center of 3000-BC Minoan civilization and fascinating Greek myths. Your ship sails on to the “Black Pearl of the Aegean”-Santorini, and then stops in Milos to explore its volcanic features. Next, you’ll cruise to Mykonos, with its blue-domed roofs, windmills, and narrow streets to shop and soak up the sun (or shade) in classic Greek style. You’ll return to Piraeus to disembark your ship, then conclude your Greek cruise vacation with two more nights in Athens including a visit to the Archaeological Museum. This affordable vacation in Greece with Mediterranean cruise is the perfect way to explore Athens and the Aegean!

ATHENS — Athens provides a good study in how the New South coexists with the Old South. A lively music scene
(supported by students from the University of Georgia) flourishes in the bars, clubs and coffeehouses of the restored
downtown (it brought the world such bands as R.E.M. and the B52s). But you don’t have to look far to find the Old South: It’s apparent in the many Greek Revival homes and buildings that dot the city, the best example being the Taylor-Grady House. The University of Georgia, across the street from downtown, boasts a number of these Greek Revival buildings, including Demosthenian Hall and the president’s house. The university is where you’ll also find the Georgia Museum of Art (a collection heavy in 19th- and 20th-century American and Italian Renaissance paintings). Off campus you’ll find the Church-Waddel-Brumby House, the oldest surviving residence in the city, now serving as the visitors center. Athens is also home to the fragrant State Botanical Gardens of Georgia. Nature trails wind through the gardens of native flora — the rose garden is especially nice (it blooms May-November). Southeast of Athens in Washington is the Robert Toombs House, the restored home of a recalcitrant Southern politician who hated the North for political reasons and hated the Confederacy almost as much for not electing him president. One of the least mellow individuals the smooth-as-silk South has produced, Toombs never gave up his secessionist fervor or his cantankerous manner. 66 mi/106 km east of Atlanta.

Mykonos is the most chic and sophisticated of all the Greek Islands–instantly recognized by its glittering crescent of white-washed houses lining an azure bay. The beaches here are unspoiled and inviting, especially along Plati Tialos Bay. Miniature churches, lazy windmills, and tiny cafes serving up Greek specialties line the streets. Sample the freshest squid or lobster just snatched from the blue Aegean Sea, or shop for typical flokati rugs.

Rhodes (rodz) or Ródhos, island (1981 pop. 40,392), c.540 sq mi (1,400 sq km), Greece, in the Aegean Sea, near Turkey; largest of the Dodecanese island group. Its fertile coastal areas produce wheat, tobacco, cotton, and olives. Tourism and fishing are important. Colonized by Dorians before 1000 B.C., it reached its height as a commercial and cultural center in the 4th-3d cent. B.C. Julius Caesar studied at its renowned school of rhetoric. After its decline, Rhodes was an ally of Rome. Captured (1204) from the Byzantine Empire during the Crusades, it was held by the Knights Hospitalers (1282-1522) and the Ottoman Turks before it was taken by Italy in 1912. In 1947 it was ceded to Greece. The famed Colossus of Rhodes (see under colossus), a statue erected (292-280 B.C.) by the citizens of the ancient capital
city of Rhodes, was destroyed by an earthquake in 224 B.C.

Prices are per person, land or cruise only, based on double occupancy. Offer subject to availability and change without notice. Some restrictions may apply. Please ask us for details.

Charges not included in the land vacation price: airfare to and from the start of your vacation; airline baggage fees including checked and/or excess baggage fees; Federal inspection fees for the Federal U.S. Customs and Immigrations; agricultural tax; other per person taxes imposed by government entities; applicable cruise taxes, fees, fares and port charges; passports; visas and vaccinations; transfers; tips to your Tour or Cruise Director, Local Host, driver, Local Guides, and/or ships’ crew; gratuities on ferries, trains, and cruise ships; laundry; telephone; minibar; alcohol, beverages, and food outside of the contracted menu as presented at a hotel or restaurant (these extra items will be billed to you before leaving the hotel, ship, or restaurant); additional excursions and activities not listed as ‘included’ in the itinerary; porterage at airports or train stations; Travel Protection premiums; and all other items of a personal nature.

Click on the buttons below to request a quote on this deal or contact us directly with further questions or comments.

Request A Quote Send To A Friend Have A Question? Contact Us

Send To A Friend